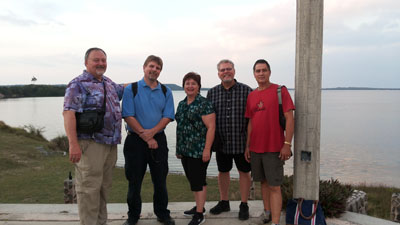 As our team arrived in Havana, we had already been fighting much warfare just to get there. We knew the Lord was preparing breakthroughs and was about to release His glory on us and on the island of Cuba. I was the first one in line for immigration. The woman officer asked if I had health insurance. I had never been asked that on prior trips to Cuba. I said, “yes” but I did not have an ID card. She told me to go wait at the front for an official to question me.

My other team members got through and went on to retrieve our luggage. I waited impatiently and after five minutes asked a soldier where was the person to interview me. He said to just wait there. This was done four or five more times in the next thirty minutes with the same answer, “Just wait.”Finally, I chose to walk through another line right in front of the soldiers who told me to wait as they chatted and ignored me. I prayed I would be invisible and was able to walk in a different line to join my teammates as they were now waiting for our luggage.

In Cuba, doing even simple tasks often takes longer. The people and God’s purposes in them are beautiful and inspiring. The frequent delays heighten our appreciation of the blessings we take for granted in the U.S. Freedom in the Spirit is increasing in Cuba and liberties are slowly being regained in the natural. In the U.S., we seem to be going the way Cuba went two generations ago, losing our hard-won religious freedoms. 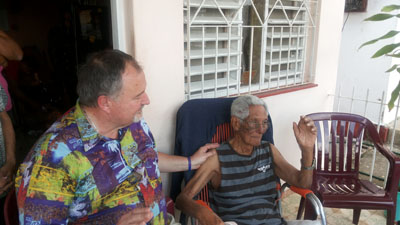 The next day, we were blessed to visit with long-term friends, Ramon and Mayda, and their twenty-five-year-old son, Samuel. Ramon has visited MorningStar twice so far. I have known them about fifteen years as part of Mision Mundial, a ministry founded by Sidney Correll, founder of CMM in the 40s and 50s. The first missionaries of United World Mission, also founded by Sidney Correll, were sent to Cuba in the late 1940s. Sidney rode a horse around the island seeking the Lord for the right place.

On a hilltop in Los Cabanas, the Lord spoke to Sidney that if he would go and speak to the owner of the land located below him on a beautiful bay, the owner would sell it to him. The parcel of about thirty acres was seized by Castro in the early 1960s and used as an army camp for many years. Now it is in the hands of Christians once again. There is still need for battle, however, as the danger now is the religious spirit and control under current traditional leaders who seem to squelch the Holy Spirit. Some of these pastors are seeing miracles and supernatural healings and yet their leaders are bent in curtailing their activities. 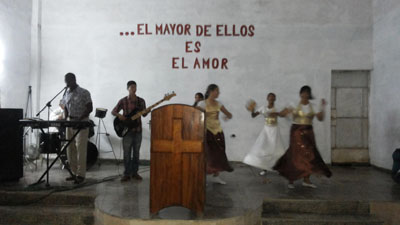 Twelve years ago, I asked the Lord about this couple coming under our ministry through neighboring Dominican Republic due to the trade embargo between the U.S. and Cuba. The Spirit said to wait until He put on their hearts to ask me for our ministry to be their spiritual covering. Good things come to those who wait. Their request to come under our spiritual covering is warmly welcomed on this trip.

Antero Acoy was the first convert of Sidney Correll in 1948. He has impacted every part of Cuba and helped plant seventy churches and raise many leaders. Some of their churches were boarded up for twenty-six years during the early days of Communism.

In the 1906s, one pastor was imprisoned for evangelizing in the army. Osvaldo is one friend of God who fasted and prayed for sixty days in prison and began to win fellow prisoners to the Lord. Then when guards began to come to Jesus too, he was kicked out of prison for bringing revival there.

At ninety-eight years old, Antero’s mind is still sharp, and he is known as one who glorifies God. With every word and every conversation, he is focused on the Lord. I asked him to lay hands on me to enable me to continue in helping fulfill the Great Commission in Cuba and globally. It was a powerful impartation. Ruthie Wickline (MFM pastor from Kansas and wife of Jerry) said she saw heaven open up as we sat on Antero’s front porch, and the glory of Jesus come to earth right then. 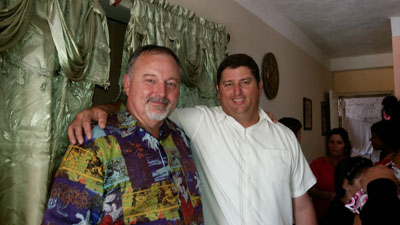 God has given great favor and access to Osmani and his ministry as he goes all over the island with the gospel and sports ministry. Osmani is a former Olympic athlete. The Holy Spirit has given Osmani amazing strategies for this season. His testimonies are powerful. The fruit of his ministry is huge. The boldness of his faith is moving mountains. Osmani is the first graduate of the MSU College of Theology in the nation. He has seventy-five pastors in schools in three locations.

In late 2012, Osmani was led to approach the maximum security prison officials to play baseball with the prisoners. By the end of the day, the prison warden, the guards, and all the prisoners had given their hearts to Jesus. Osmani is training up bold leaders and pastors from surprising backgrounds, much like Jesus did.

One police official over a province called him into his office recently telling him he could not evangelize in his area. Osmani told him his activities were guaranteed by the Constitution. He asked the Holy Spirit to guide him. Osmani asked the official how many children he had. The official answered he had three children. Osmani went to his car and got three new baseballs. 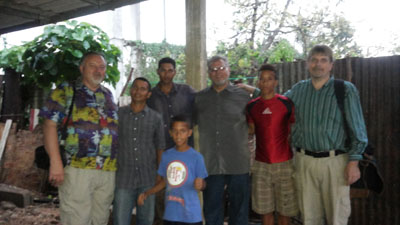 One pastor that Osmani introduced us to is named Aline. We said he is “aligned” with the Lord. He is thirty-two years old and had led more than 18,000 to Jesus in just a few years. Last year Aline had a crusade in one eastern city in a field with 360,000 attending. As our team visited Aline’s home, we began to prophesy. Randy Cutter (MFM pastor from Florida) said he saw Aline as a sailfish. Behind Randy (without his knowledge) was a picture of Aline holding about a four foot long sailfish he had caught. That day we ate sailfish for lunch along with albacore tuna the father had caught. They live about 300 feet from the ocean, a half hour east of Havana.

Prophetic words and words of knowledge flowed freely each day in Cuba. While we were with Aline’s family, Jerry Wickline (MFM Pastor in Kansas) saw his dad, Nelson, coming in and out of the house. Jerry went outside to prophesy and brought him back inside. He downloaded many words to Nelson.

The anointing was very strong in that house. When Jerry was done, I prophesied to Nelson about seeing a creative gift of painting in him. I began to walk away as I said, “You can paint and glorify God without telling anyone. Jesus says that if we are ashamed of Him, He will be ashamed of us before our Father God. Today is the day of salvation. Are you ready to receive Jesus as your Lord and Savior?” Nelson answered, “Yes.” I then asked Osmani to lead him in the prayer of salvation. We rejoiced with many angels every day in Cuba.

Churches Under Construction-Fresh Rain After Drought

Osmani met us in one town of 10,000 that has two new churches under construction. Years ago it was almost unheard of to hear of new churches being built. I have heard reports from friends there that party leaders in many towns resist repairs to churches and almost never permit new church buildings. Pastors were told to tell neighbors their buildings were libraries, or garages, etc.

It had not rained for over two months when we arrived. Our team had been praying for the rain of the Spirit to fall afresh on this parched and hungry land. By the third day, it began to rain and rained for the next several days. I was asked to pray for each church and pastor we visited. I would prophesy as I prayed.

At one of the new churches under construction, we stood under the finished roof and open walls, and as we began to pray thunder and rain began instantly. It was a holy time indeed to be praying and to see the heavens open up and rain down a fresh deluge. There is nothing like the fresh touch of the Lord’s presence with His glory and love invading our lives.

A Vision of Waving A Flag Dripping Jesus’ Blood

A woman doctor had a vision while I was sharing at Osmani’s church on the last day of our trip. At the end of our time there, she said she saw me standing in front of a vast army of God’s people preparing to bring revival to Cuba. In her vision, I was waving an Israeli flag over Cuba, and the blood of Jesus was dripping over the whole nation. Behind me was a vast army of believers. We were preparing for a love invasion over the island.

My mother was born in Cuba in 1922. She married my father (from Illinois) in 1945 while he was stationed as a weatherman in the army in Cuba. My last surviving relatives who had not left Cuba passed away in recent years. Thankfully, I had led them to Jesus about thirteen years ago, so I know they are joyful in eternity.

We were allowed to visit a large printing operation in Havana where many Christian books, articles, and literature are freely produced. Editors screen the writings and will not allow any anti-government rhetoric to be published and distributed. Dedicated workers hand collate pages of newly printed material produced on old Russian offset printers. It was a sight to behold the gospel going forth in this Communist nation.

Years ago, I remember seeing three channels on TV in Cuba. Two were of Castro speaking, and one was CNN. Now there are many channels including some Christian programming with praise and worship from Venezuela.

Change Is Slow-Change Is Fast

Change continues in Cuba. We visited some of the new businesses in homes that have been permitted in the last few years. Cubans can buy and sell real estate and cars. The cars cost at least twice as much as they do in the U.S. With an average wage of $20-$30 per month for the average Cuban, we can imagine the resourcefulness, perseverance, and faith of these overcoming and passionate people.

We continue to pray for the salvation of Fidel and Raul Castro and their leaders. We know with God all things are possible. Once again while in Cuba, our team sensed a revival so pure that people from around the world will flock to Cuba someday soon to witness the glory of our Lord. Our team got a sense also of evangelists being sent from Cuba to every nation of the earth. Rick Joyner had a vivid dream of revival coming to Cuba that the earth had not seen. That revival is not there yet, but you can sense it and breathe it in. It is getting closer every day.

Osmani has a Cuban flag on stickers for his ministry, and you see them all over the island, even on professional baseball team batter’s helmets. Cuba para Christo! Cuba for Jesus. Get ready. Watch and pray for Cuba.

Contact our Mission’s office at officecmm@gmail.com if you are interested in joining a team to Cuba. Visit https://cmm.world and sign up for our free mission newsletter.