Thus says the Lord God: “When I have gathered the house of Israel from the peoples among whom they are scattered, and am hallowed in them in the sight of the Gentiles, then they will dwell in their own land which I gave to My servant Jacob.

“And they will dwell safely there, build houses, and plant vineyards; yes, they will dwell securely, when I execute judgments on all those around them who despise them. Then they shall know that I am the Lord their God” (Ezekiel 28:25-26).

Israel has been a sign and a wonder for millennia. Sometimes hidden and continually persecuted, the nation is a living testimony of the Lord’s faithfulness, prophetic destiny, the supernatural, and the fulfillment of God’s plans.

Recently, twenty MorningStar Partners, staff, MFM, and MS/CM Missions members and friends traveled to Israel as part of a tour group led by Reuven Doron and GenesisToursUSA.com. For many, it was their first trip to the Holy Land. Everyone had life-changing encounters.

Declarations Over Israel and the United States

On our first night in Tel Aviv, we met with Avi Misrachi of Dugit Ministries (www.dugit.org) who MS/CM Missions supports monthly (many key MFM leaders are on Avi’s U.S. board). After a time of worship in their Prayer Tower, Avi shared about Dugit, and Reuven asked me to pray and prophesy over the nation of Israel. From the Dugit Prayer Tower windows, the Israeli departments of Defense, Banking, Education, Communications, Commerce, and Government buildings can be seen—the seven mountains of Israel right before us. I prayed and prophesied God’s plans and fulfillment of His promises over Israel and all the sectors set before us.

At the end of these declarations, we were reminded that Benjamin Netanyahu and President Trump were meeting each other in D.C. Our team felt the timing was significant in light of the fact that these two leaders were following my prophetic word to President Trump on October 14, 2016. In that word, I included words about a strategic agreement between Israel and the U.S. I felt that this agreement would face resistance around the world, but that it would ultimately win approval and be a huge spiritual and financial blessing to both nations.

Tel Aviv-Yafo is a city composed of the ancient and the modern. Yafo (Jaffa, Joppa), the southern part of the city, is almost 4,000 years old and was the main port city on the eastern coast of the Mediterranean Sea for centuries. It also frequently served as a military beachhead. The port was seen as the gateway to Jerusalem and the East, and it was conquered by various empires throughout history. Tradition says that one of Noah’s three sons, Yefet (Japheth), founded the city of Yafo. Later, the famed cedars of Lebanon used to construct the doors of the second temple (see Ezra 3:7) were shipped through the city.

We spent seven days touring the biblical historic sites. From Tel Aviv we went north to Caesarea and Haifa. We visited Mt. Carmel where Isaiah had many God encounters, and then headed to Tiberius on the Sea of Galilee.

We were offered the opportunity to visit an IDF Special Forces encamped at a secret location. Our tour guide, Amos, an IDF veteran in the active reserves, took us to meet his son who is the commander of a small team. We were asked to pray for them, and were able to spend time one-on-one with them. It was fascinating. One of the team is a Messianic believer. They were friendly and appreciative of our support and prayers as Christian friends of Israel. This visit led to an up close understanding of those who dedicate their lives to Israel’s protection and the biblical mandate to exist as a nation.

Young men in Israel are required to serve three years in the military and young women two years in public service. Pray for these brave men and women. Israel is a leader in many areas: the best military, intelligence gathering, technology, medicine, Nobel Prize winners per capita, and more.

After we left, Amos shared how they spent a lot of time on their knees in training, crawling for the real world of warfare. He asked our group to pray about helping them get high quality kneepads. Our tour group took up an offering and raised $700 for the kneepads. The Lord showed me we were helping them get on their knees for battle, and we prayed several times for them to know the Lord Jesus as Savior. 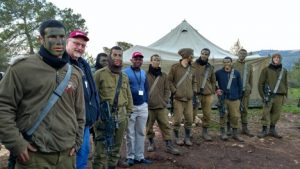 The Gates of Hell Will Not Prevail

We visited the place where Jesus talked with Peter about the “rock upon which He would build His church” (see Matthew 16:13-19). Near this place you can still see Egyptian statues to their gods and other ungodly artifacts.

We also visited the Holocaust Museum where the horrors of World War II are shown with disturbing images. Everyone should see and remember so as not to permit this attempted genocide to happen again.

On our last day in Israel we visited the Western Wall to pray. Everyone goes through security and all bags are x-rayed. After a few minutes at the Wall, we could hear the Muslim call to prayer over loudspeakers. It was annoying and intrusive. Job 22:28 speaks to us that “You will also declare a thing, and it will be established for you; so light will shine on your ways.” I am sure many have been praying for generations for this to stop. The prayers of the saints avails much. Righteous anger rose up in me to declare “Lord this must stop! I declare this will stop across Israel.”

There are many more highlights to share that occurred on this trip than space permits.

We are called to stand as watchmen in many places, including Israel and the Middle East. We support many who work in covert missions in Israel, the Middle East, and closed nations. We ask you to pray for and consider financially supporting our precious friends who risk their lives to share Jesus. As the Lord leads, go to https://cmm.world and give today to support our covert missions efforts to reach the unreached in dangerous regions of the earth. 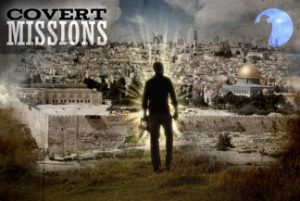