By Jorge Parrott
All Scripture references are English Standard Version.

Are we prepared to be hated for the name of Jesus? In John 17:14 we learn, “I have given them your word, and the world has hated them because they are not of the world, just as I am not of the world.” Then in John 17:18 we read, “As you sent me into the world, so I have sent them into the world.” He is in us and He has sent us to release the good news. In verse 26, Jesus prays to the Father: “I made known to them your name, and I will continue to make it known, that the love with which you have loved me may be in them, and I in them.”

Our part in fulfilling the Great Commission authorizes and empowers us to disciple the nations and learn to see and love with His heart. This will cost us dearly in terms of our comfort zone, our lukewarm complacency, and our own desires and agenda as our carnal nature is burned up.

Jesus is worth it all. He desires us to have His joy, and He speaks to the Father on our behalf: “But now I am coming to you, and these things I speak in the world, that they may have my joy fulfilled in themselves” (John 17:13). We live this set apart life for His joy, not our own. We know without faith it is impossible to please Him (see Hebrews 11:6). 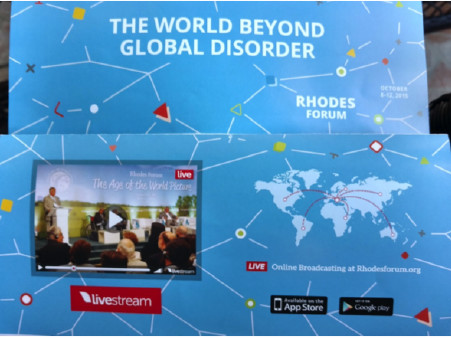 Brochure from the World Public Forum. The theme for this year is “The World Beyond Global Disorder.”

As I write this, we are finishing our time at the annual meeting of the World Public Forum in Greece on the Island of Rhodes. Representatives from sixty nations gathered together under this year’s theme of “The World Beyond Global Disorder.” Even among the mostly secular attendees, there is a deepening awareness that the world is not the same as it was even last year. Many of the world’s crises are beyond human remedy. What an excellent time for the “light bearers” carrying Jesus to be deployed without delay. The whole earth moans for the Lord of light to make Himself known.

We discussed in depth the increasing crisis of the migration of refugees from many nations flooding into Europe. In Greece alone, over 350,000 have come ashore this year. As Greece suffers their own economic crisis, the European Union pressures them to reduce spending while still taking care of the largest percentage of refugees to pass through its borders without outside aid.

Some in attendance at the Forum blamed the current crisis on America’s vacuum of leadership and inconsistent foreign policy. Others blamed it on Israel. However, there was solid agreement on the cause being radical Islamic extremism. We heard many reports of harsh brutality and barbarism like that of the Dark Ages. Torture, rape, beheadings, and unimaginable cruelty are inflicted upon innocent people of all ethnic backgrounds. Millions are fleeing in hopes of a better life for their families and a fresh start in a new land. How the nations welcome these fleeing masses may well determine whether they are a sheep or goat nation in the end times.

An encouraging consensus prevailed on the breakdown of the family globally. Core beliefs in the God-ordained structure of family, marriage between a man and a woman, and traditional values in every society have been increasingly attacked in modern times, leading to horrific results and catastrophic consequences.

Going Over the Fence Into Syria With Love
We were blessed to see our dear friend Daniel, who was born in Iran and trained as an extremist before being radically saved. He now ministers to refugees in Syria. Daniel updated us on how the Turkish government sent two hundred soldiers to warn Daniel, his team, and thousands of refugees. They had twenty-four hours to leave Turkey and go into Syria, where many had fled from bombs, fighting, and persecution.

I took the opportunity in one session to ask the Turkish Ambassador about the blocked shipments of aid and equipment we and others had shipped to help the refugees, and also about the armed threat to refugees to leave Turkey within twenty-four hours and return to Syria. He denied knowledge of these events and conveniently spun the conversation to a shallow political discussion about the general influx of many refugees into the nation of Turkey. Even that day in Ankara, Turkey, nearly one hundred were killed and about two hundred were injured by a suicide bomber, allegedly sent by ISIS.

I also shared with the Turkish Ambassador and the session’s attendees how the Muslim mayor of Kobani, Syria was so moved by Daniel and his team’s compassionate humanitarian efforts to the Syrians that he is permitting the first Christian church in two hundred years to be built in Kobani. He is also giving land for the church and refugee camp to Daniel and his team to build permanent buildings and an orphanage. This kind of love will soften the hardest of hearts to receive the love of the Father. It will also change minds as the heart of Jesus is made manifest for all to see. Daniel also shared how he met with leaders of the European Union in early July. He had a private meeting with Angela Merkel, leader of Germany, who told Daniel she is the daughter of a pastor.

The session on the wave of migration also discussed how Europe is a Christian continent, yet most do not attend church. Still their hearts are open to welcoming the immigrants while to date, no Muslim nations are accepting the flood of predominantly Muslim refugees. Many Muslims have come to Jesus. Daniel shared with us about the supernatural miracles, healings, and people experiencing the reality and love of Jesus. Tumors are falling off, and hearing loss and damage from bombings are being restored.  Hope is also being restored as God’s love and message of the transformed life through Jesus Christ is shared and demonstrated daily.

As I write this, Daniel is most likely back in Syria. He returned first to Athens to visit the refugee center he founded three years ago before making his way back to Syria by himself under the cover of night. He did not want to endanger other lives as he made the dangerous crossing, climbing over the fence and running under the protection of our Holy God to give himself away as a witness of Jesus and to serve and disciple the masses coming into the kingdom. Please pray for Daniel and his family. Recently, Kurdish fighters in Syria who have helped Daniel and his team marveled that at times he was seemingly invisible to enemy combatants, even under bright lights. He testified to the Kurdish fighters that the Lord sends angels to make him invisible to the enemy.

Poisoned but Not Deterred
Just a few weeks ago, Daniel was growing increasingly weak, feverish, and sick from what some thought was prostate cancer. As he grew weaker, his wife and sister-in-law, a nurse, came into Turkey to pick him up. He had collapsed and was thought to have died, and he was hallucinating about seeing his wife. They quickly picked him up to fly him to England for medical treatment. The airport officials said he was too weak to travel. They pumped his body with antibiotics and forced him to rest, and he traveled three days later to undergo extensive tests. It was learned he was slowly being poisoned.

Daniel refused an offer of a police investigation to punish the one who poisoned him. He did not want to endanger his innocent staff, and he has chosen to forgive whoever did poison him. Truly we are witnessing a real hero of the faith. This man is on a mission of love that transforms all who meet him.

Here we are praying for Daniel prior to his return to the Athens refugee center and back to Syria to aid the refugees. 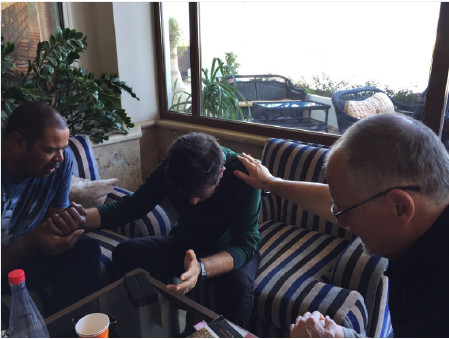 Servants Running To the Sound Of The Battle
Hajeeb was born in Nineveh and is called to minister the love of Jesus to the Yazidis in Kurdistan, Iraq. He shared heart-breaking reports of pastors being imprisoned and tortured, churches turned into jails, wives and children being separated from their families and sold separately into slavery. He is committed to loving and helping this often persecuted people group, the ones who are unwelcome to Muslims and shunned by Christians. He said the Lord showed him how much He loves these unloved treasures forced from their mountain home.
Najeeb—born in Nineveh and called to minister and love the Yazidis who have been rejected by Muslims and Christians. 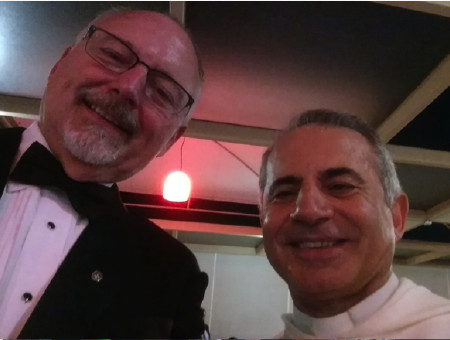 Our friends and partners from China have rescued four hundred young Yazidi women. All have been raped by ISIS terrorists, and a school and homes of hope and restoration are being prepared to comfort, educate, and restore these broken lives.

I met a reporter from Canada who has written for National Geographic magazine. He soon will travel to Kos and Lesbos, islands of Greece, where refugees have flocked. Daniel answered email questions by this reporter about how these two islands have enough food, water, and medical care but are in desperate need of translators who know Arabic.

Your Call To Action
Desperate times call for God’s people to step up as never before in history. We are called to do great exploits, and human nature and history have shown that too often people have only risen up when forced to make a stand. We are in that time, and the urgency warrants us to inquire of the Lord how we are to make a stand in this hour. The wind of the Holy Spirit is blowing upon God’s army to stand for truth and righteousness with faith and boldness. Courage is available as we trust the Lord for wisdom and revelation. We each have a part to play and souls are at stake. How will we respond?

Help us by praying, and as the Lord leads, make a donation to our Rapid Response Fund or Covert Missions Fund at http://cmm.world
Contact the Missions Department for more information about the many opportunities in intercession and ministry support teams. Call 803-802-5544 ext. 392 or email missionsbase@gmail.com for more information.